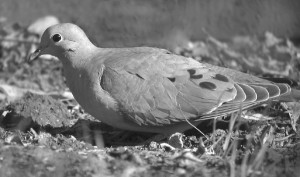 As much as you might think that those mourning doves that you see in your back yards are locals, many of them are probably migrating from as far north as Canada in the late summer and up from Mexico in the spring. Mourning doves, like ducks and geese, are migratory game birds regulated by the Migratory Bird Treaty Act of 1918.
For More Information

We don't think of doves as migrating because we don't see massive flocks of them flying in "V formation" like waterfowl, but people spend their entire careers documenting this phenomenon. For example, Karen Fothergill kfothergill@dfg.ca.gov is our local California Department of Fish and Game Wildlife Biologist in charge of California's part of the U.S. Fish and Wildlife Services' "Mourning Dove Call-Count Survey." This survey was developed to provide an index to population size and to detect annual changes in mourning dove breeding populations in the U.S. The survey consists of numerous routes throughout the U.S., which are surveyed in late May and early June. The resulting estimates of relative abundance and population trends comprise the principal information used in the annual setting of mourning dove hunting seasons.

As the summer wears on, have you ever noticed an increase in
these doves in your back yard? Just for fun, next year try
noting on the calendar how many doves you see each day.

This article originally appeared in our Fall 2006 Newsletter

This entry was posted in Author: Bill Templin. Bookmark the permalink.