All photos courtesy of Frank Wallace

What is the Problem with Arundo?

Arundo (also called Giant Reed) is a bamboo-like grass that
thrives in moist soils and Sacramento's hot climate. It can
grow up to 30 feet tall, as much as 1 foot a week in the
summer! Arundo chokes out valuable native trees and shrubs
that are an essential part of urban creek corridors. Willow,
cottonwood and oak trees along with elderberry and buckeye
shrubs provide food and nesting sites for native animals.
Arundo competes aggressively with these plants, but native
animals do not eat Arundo and birds will not nest in it.
Arundo uses as much as 3 times more water than native plants
and is extremely flammable. Arundo clogs streams and
drainage channels, increasing the risk of floods and
property damage.

Where does Aundo Come From?

Arundo is a native of northern India and of the countries
surrounding the Mediterranean Sea. It was brought to the
United States as an erosion control plant, for fencing, as
an ornamental plant and for livestock feed. It was well
established in southern California by the 1920s, and has
spread throughout most of the Central Valley and the
Sacramento River Delta, where farmers and homeowners now
use it mostly as a wind break. It is infesting many creeks
and drainage canals in Sacramento, the American River
Parkway and as far upstream as the north fork canyon below
Colfax.

How Can Arundo be Eradicated? 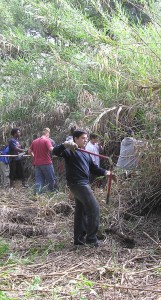 The Sacramento Weed Warriors (SWW), in partnership with
the Sacramento Urban Creeks Council, has recently received
a California Bay-Delta Authority grant to begin eradicating
Arundo in Sacramento area creeks and the upper American River.
SWW has been removing Arundo from the American River Parkway
since 2001 under the supervision of the Sacramento County
Parks Department. With this new grant support, SWW will
collaborate with many local government agencies and will
organize a community outreach program to publicize the
project to schools, youth programs, neighborhood associations,
church groups and environmental organizations. We will be
organizing volunteer work groups to cut down the tall Arundo
stalks and haul the slash away from the flood channels.
Once regrowth occurs, a professional applicator will apply
an herbicide to kill the thick rhizomes (root system).
Arundo is very difficult to kill, so SWW staff and volunteer
teams will monitor all treated areas for at least a year
to be certain that no resprouts appear.

The primary target areas include Arcade Creek downstream from
Haggin Oaks Golf Course and Humbug Creek in Folsom. More than
30 Arundo clusters are infesting the lower portion of Arcade
Creek from Roseville Road to Norwood Avenue. There are
isolated clusters in north and south Sacramento, Auburn and
western Placer County.

For more information or to join our volunteer email list for
work group flyers, contact Frank Wallace, SWW Director at
213-4682 or frankw2@pacbell.net

This entry was posted in Author: Frank Wallace. Bookmark the permalink.