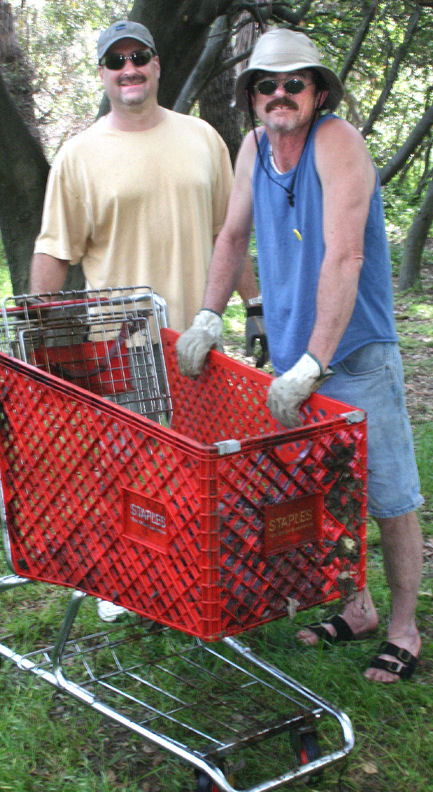 Valley View Acres is a rural neighborhood in North Natomas bordered on two sides by Steelhead Creek and the Ueda Parkway. The east levee of the creek is a front or back fence for many residents. The parkway and creek are used year round for bike riding, horseback riding, dog walking, hiking, jogging, bird watching, fishing and general nature enjoyment. There are others who use the area for car dumping, trash dumping, unwanted pet dumping, drinking and other less desirable activities. The neighbors police the creek on a regular basis and keep an eye out for dumpers.

On April 28th, residents of Valley View Acres were joined by a bus load of Center High School students and other Creek Week volunteers to clean Steelhead Creek. The students working with the Weed Warriors concentrated on the eradication of red sesbania, a pretty but incredibly invasive plant/weed. The other folks spent time pulling trash out of the creek to make it safer for wildlife, horseback riding, fishing, and other recreational use.

Four sites along the creek were manned by volunteers from the neighborhood. Trash was placed in bags and hauled to the top of the levee where city, county or special district employees loaded it into trucks to be hauled to the landfill. The red sesbania trimmings were pulled to the levee top and put in a dumpster. Some of the larger items, like a camper shell, tires and shopping carts were dragged up the levee and left for the dump trucks. Although regretful that muddy banks prevented the hauling out of an engine, volunteers headed for the Celebration at noon, satisfied with the morning effort.

Libby has been a Creek Week volunteer for many years. We thank her for her hard work and leadership on the Steelhead Creek cleanup.

This article originally appeared in our Summer 2007 Newsletter

This entry was posted in Author Libby Harmor, Creek Info. Bookmark the permalink.